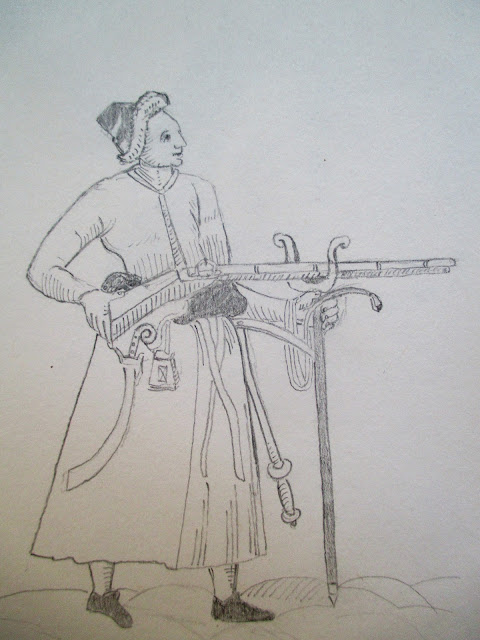 My drawing of Gesche Meiburg

The story of Gesche Meiburg is remarkable for many reasons. For one thing, this must be a rare example from the medieval or early modern period of an ordinary woman, without wealth or status, acquiring such fame that her name and deeds have come down to us through the centuries. More exciting still are the deeds themselves: Gesche was Braunschweig’s Heldenjungfrau, its virgin heroine, a female warrior who fought to defend her town’s freedom and independence. She has been compared to Joan of Arc – another, far better known female soldier from the preceding century who, like Gesche, played a key role in lifting a siege.

The year was 1615, the ruling duke was Friedrich Ulrich. He was the grandson of Duke Julius (see previous post), but apparently had not inherited any of his grandfather’s leadership skills. Like his predecessors though, he wanted to get his hands on Braunschweig. From his palace in Wolfenbüttel, he must have looked over in the direction of Braunschweig, where the lofty church spires boasted of the city’s rip-roaring wealth and success (see image), and been green with envy. As for the Braunschweigers, they were weary of the long-running conflict and were keen on reaching a settlement with the new duke. But he refused to accept the concessions they offered – he was driving a hard bargain and wouldn’t back down. So, for the 13th time in its history, the inhabitants of the town found themselves being besieged by ducal troops. I start to go stir-crazy if I have been in Braunschweig for several weeks in a row and haven’t taken a train or a plane anywhere – how must it have felt to be trapped inside the city for months on end, with enemy forces prowling around outside and cannon balls flying in over the walls at intervals? Still, the town was a veteran of many sieges and well equipped to survive them, with large stores of grain and livestock within the city walls. However, the onslaught this time was particularly intense, and as the months went by, Braunschweig’s situation looked ever more precarious. Things really came to a head in the night of 13th  September 1615 (400 years ago this year), with the ducal army preparing to storm the town fortifications near the Magnitor (one of the city gates; the nearby Church of St Magni, pictured, had already lost one of its steeples to the bombardment; it is still missing to this day). A valiant defensive effort would be needed if the town were to be saved, and all citizens were called upon to join the fight. And join they did, not just men, but women too, which was almost unheard of at the time. According to contemporary reports, the women carried stones in their aprons and dropped them on to the heads of unfortunate besiegers trying to scale the walls. But our Gesche (who was the 34-year old unmarried daughter of a...well actually the sources can’t seem to decide whether her father was a Ladenmacher, a maker of window shutters, or a Lakenmacher, a cloth maker, but anyway, a craftsman of some sort) far outshone them all. She fought atop the ramparts with sword, war hammer and musket, and rallied her fellow townsfolk, urging them to fight bravely and assuring them that as long as she was with them, they had nothing to fear. It was said that 500 shots were fired at her, but not one of them struck its target, and she remained unschathed, despite not wearing any armour. Onlookers believed she must have supernatural powers. Yes, I know, it all sounds just a wee bit far-fetched. But the fact such claims were made at all indicates that Gesche really was something quite special. The attack of that night ultimately failed, allowing the town to hold out until the arrival of troops sent by one of Braunschweig’s Hanseatic allies a few days later. By November, Friedrich Julius had had to admit defeat and traipse back to Wolfenbüttel with his tail between his legs. The siege was over, and Braunschweig had preserved its independence.

As for Gesche, she became an overnight sensation. The idea of the fairer sex participating in battle was novel enough, but the fact that a woman should have acquitted herself in such exemplary fashion at such a critical moment in the conflict was nothing short of extraordinary.  Her deeds were reported in a local newspaper the following day, and were soon being celebrated in printed flyers featuring poems in her honour, as well as images like the one I have copied for this post. There are at least four different examples of these celebratory prints, including one printed in Augsburg (over 250 miles south of Braunschweig), which is fascinating evidence of how far Gesche’s fame spread.  These were the early years of print culture (in fact Wolfenbüttel was the home of the first German-language weekly newspaper, printed in 1609) and already there is a clear link between print media and the creation of celebrity, a topic it would be interesting to explore further.

One of the printed flyers produced to celebrate Gesche Meiburg's feats

There does not seem to be any more information on Gesche Meiburg’s life, so we can only speculate about what might have happened to her after the 14th of September. Was she hoisted onto the shoulders of jubilant Braunschweigers and paraded through the streets surrounded by a cheering crowd? Sadly, she didn’t have long to enjoy her fame, as she died only a year and half later; her death is recorded in the church records without further comment. As such, it appears she was something of a one-hit wonder, but that shouldn’t diminish her achievement. Whilst I wouldn’t want to condone violence, God knows the men have been at it since time immemorial, and there is something satisfying about seeing a women not only getting a piece of the action, but beating the men at their own game. And the idea of the strong female heroine who can stand up for herself, take on a leadership role and inspire others – a woman who isn’t afraid to stick her head above the parapet, quite literally in this case – is one that is still relevant and important today. As a former teenager of the 90s, I am tempted to cast Gesche as an early modern Buffy the Vampire Slayer, except that her targets were hapless soldiers rather than the undead. I am too out of touch to know who today’s gutsy female heroines are, but I’m sure somebody can let me know – Katniss Everdeen maybe? 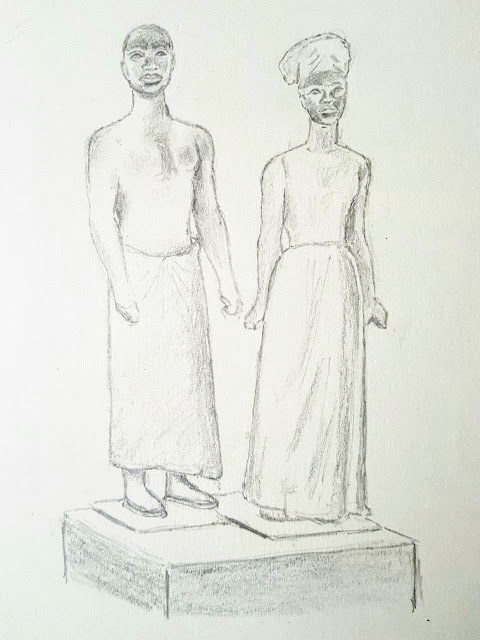